Discovery has been working with Elan Homes on two projects located within Inkberrow over the last two years, one 3 Ha site to the North and another more recent 1.2 Ha to the South of Inkberrow. Both sites are proposed to become housing developments, comprising mostly of detached, semi-detached houses, flats and bungalows.

The scope of works on the northern Inkberrow (20/10/2022) site included 10 No. Dynamic Sample boreholes nominally to 5m bgl, 10 No. Trial Pits nominally to 3m bgl, 3 No. Soakaway Infiltration Tests and the installation of 4 No. gas and groundwater monitoring wells. A Human Health Assessment and Controlled Waters Risk Assessment were conducted and it was found that the risks from these assessments were Very Low/ Negligible. A Gas Assessment was also conducted between 28/10/21 and 29/11/21 characterising the site as a Characteristics Situation 1, no special precautions being required. An allowable bearing capacity of 140kN/m² is considered for Strip Foundations which were concluded to be most appropriate, being placed at a minimum depth of 0.9m bgl in the firm clays. No ground improvement was considered necessary for the proposed development. Despite the muddy ground conditions the team persevered.

To the South of the first site DCE worked on in Inkberrow, there was another open parcel of land (14/07/2022) that Elan wished to develop. The scope of works on the southern Inkberrow site included 8 No. machine excavated trial pits nominally to 3m bgl, with 3 No. Soakaway Infiltration Tests and 8 No. Dynamic Sample boreholes nominally to 5m bgl. At the time of writing the Interpretative and Factual Report is currently being written. 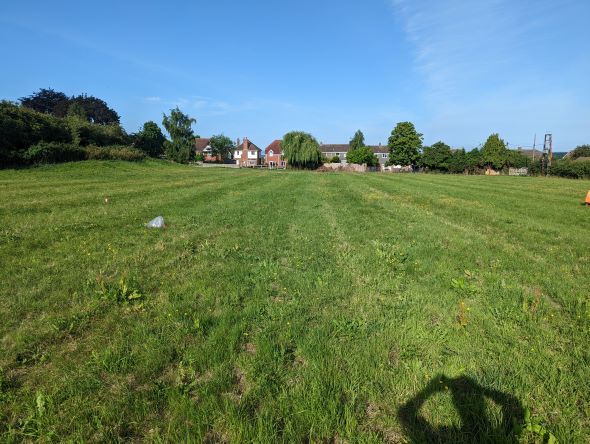